Seriously, How Do We Stop These People?

Printing is an old profession. Not the oldest profession, mind you, but it’s been around a long time, since the mid 1400s, thanks to Mr. Gutenberg. While this digital age has had its impact on our profession, it continues to live on. Even though today’s print is driven by technology, there are still those that remember well it being a trade, a craft to be learned, practiced and treasured. Recently, two long-time craftsmen, or shall we say crafts-people had the chance to meet and reminisce about their beloved industry. 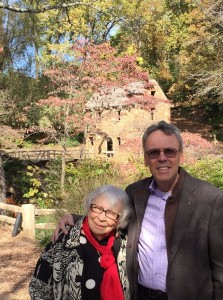 Being a second-generation owner too, I was excited about this visit. A morning set aside to talk shop, learn, and share stories with fellow print owners. When I found out that my folks, Ira & Mary Lee Strack, founders of CustomXM would be able to join us for lunch, this historical day got even better.

After a tour of our shop and a brief visit to the Old Mill in North Little Rock, (this was a stop on Marthabelle’s list), we decided on Capeo, a nice lunch spot in downtown Argenta. My wife, Lisa, joined us so we had a pleasant party of six.

Once all had arrived, we decided that the seating arrangement that made the most logical sense was to put the two veteran compositors side-by-side. This way Ira and Marthabelle could swap stories of ink, darkrooms and lithography. But most importantly, we wanted them to be able to hear each other! It was quite a hoot observing these two reminisce about bygone times. Hand gestures indicating the size and type equipment each had used; heads nodding in agreement about old school methodology, and of course, the occasional , “Huh? Could you repeat that?” dominated their conversation. Ink definitely runs in their veins, and they are certainly part of a dwindling breed.

Ira Strack and Marthabelle Leonard reminisce about the crafts of the trade.

Marthabelle opened her shop in 1956. Having a somewhat diverse mechanical background – working the shipyards during the 40s and selling printing equipment in the 50s, she fit perfectly as a hands-on owner of her printing company. She was one of the very few women in this man’s world of printing. She could produce quality printing on small presses that enabled small businesses to buy mailers and sales brochures that previously had been too costly. She didn’t advertise — her customers referred all their friends with printing problems to her. At 97 years young, she still comes to the office two days a week to assist her son Henry. But mainly to bring him his lunch.

Ira, the youngster at only 82, bought a printing press in the 60s and began operating out of his garage as a part-time business while he worked full time at International Business Forms in Little Rock. 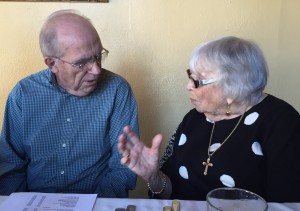 At times the discussion was straight on point.

In 1966, he partnered with an associate, bought some additional equipment, and opened Custom Printing Company (now CustomXM) at our current location in North Little Rock. Shortly thereafter, my mother, Mary Lee, joined my father and they became full owners in the business. Mom still comes in two days a week. My agreement when I left public accounting to join the family business was that I didn’t have to do the books or payroll. Ever. Mom still upholds that end of the bargain. Dad plays golf three days a week. 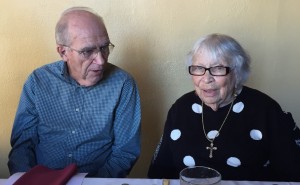 That’s what she said. Wait, what did she say?

It literally was a lunch for the ages. Imagine, at one table, among 3 true pioneers in this old-but-every-changing industry, there sat over 160 years combined experience.

I guess it’s true what they say,”Old printers never die, they just give up the chase.”

Stop the SaggingEven If It’s Not Brand New, Brandish It With Pride
Scroll to top