If you are familiar with any visual or graphic design related topics, you probably have heard or even used the phrase, “white space is our friend.” White space, or negative space, is simply that: an unmarked portion of a related graphic, print, canvas or other medium where images or text do not appear. I’ve recently come across an interesting use of negative space that is more literal in nature. It is space so negative, that it doesn’t exist. In theory and in reality, it is full of holes.

Vinyl banners have been a mainstay for outdoor announcements and signage. You see them everywhere – grand openings, auto dealerships, community and sporting events. Banners and signs like these are affordable and effective sales tools. They begin working the moment you put them up, and don’t stop until you take them down. And when the need arises for these to be outdoors for an extended amount of time, or depending upon the height at which these banners will be displayed, you may notice banners with half-moon slits cut into them. This is done to allow the wind to pass through the banners. After all, most advertisers would prefer that they remain banners, and not 6’x10’ sails.

But this may not be the most attractive answer to this problem.

Fortunately, an esthetic and functional solution exists, and it’s a wholly pleasant improvement to the situation that involves negative space. Or it’s a holey improvement. Mesh Banner material, a digital media that is 60% material and 40% air (give or take) provides a solution that has some rather eye-catching benefits. This material holds full color images in a stunning fashion, and actually blends into the environment with a near translucent effect depending upon where the direct light hits it. 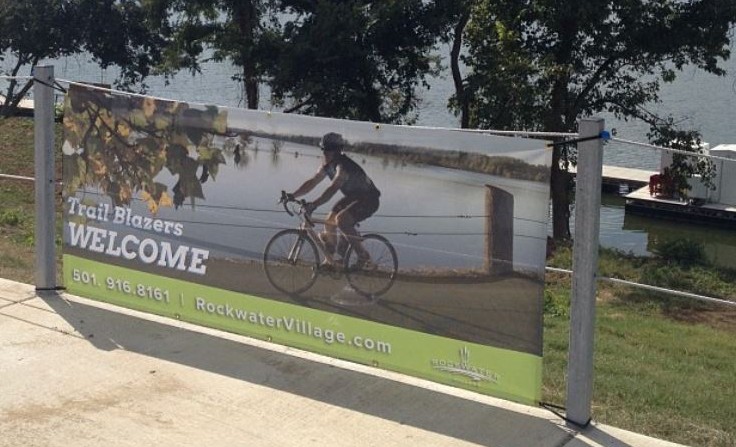 Until recently, I was under the impression that this material was best suited for outdoor environments only. But a visit to JCPenney in North Little Rock showed me how effective this material can be indoors too, especially in the retail environment. In the photos below, you can see how this mesh banner provides an artistic product backdrop when the primary light source is in front of it. Yet, it can appear nearly translucent allowing for product display behind it when the stronger light is behind it. 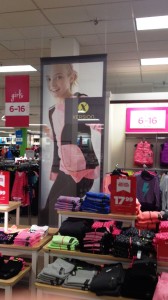 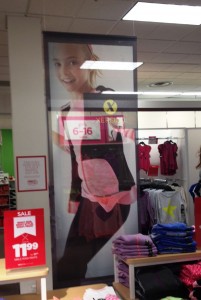 It becomes a very affordable, yet highly effective piece of interior display design.

So if you are looking for an effective way to get your message across, don’t make your audience read between the lines. Instead, let them look through the holes.

It’s Wednesday, and you know what day it is?? Of course I’m referring to What’s New Wednesday. Weekly, or at least regularly, or at least on certain Wednesdays, I plan to introduce new products, new ideas or new thoughts that relate to marketing, print and signage. Some of these may well be the next big thing in the world of communications, and some may be nothing more than a curiosity. And let’s be honest, some may just be lame. But we won’t know until we take a look, so let’s begin.

If you know anything at all about me, you know there are two true loves in my life. Yeah, yeah, we all know about my wife and our kids, but I’m not talking about them right now. I’m talking about paper and technology. Old school vs. new school communication. Imagine if you will, a world in which both of them live together in harmony; one feeding off the other. We may have discussed this courtship before when we’ve talked about QR codes and even Augmented Reality. While those relationships still do exist, some of them anyway, I found this newest union to be very interesting.

It’s called swivelCard, and in a nutshell, it’s a paper USB drive that is embedded in a business card. Cool, right? We have smartphones, smartwatches, so why not a smart business card?

Here’s a peek at their Kickstarter video:

Since it is my sworn duty to explore all things paper-embedded-with-technology, I inquired about becoming a reseller of this product, and purchased a sample pack. I wanted to properly celebrate this marriage made in heaven. Sadly, the honeymoon may be short lived.

I suppose that USB drives are also called thumb drives for a reason. You need your thumb to insert them into the USB slot. And when you combine the fact that I am generally all thumbs, and attempting to gingerly, then not so gingerly insert a paper USB drive into my laptop, the results were less than appealing. Admittedly, I had issues. And crumpling. Fortunately, I had more than one in my sample pack, and finally successfully loaded the drive and launched the content.

I do like this idea and the overall concept. Anything that finds a way to make the printed word more relevant and engaging is a must have for me, But I do have questions that make me wonder if this will have legs:

Actually, ignore that point, we can always print more!

So that’s What’s New this Wednesday. Is the swivelCard something of interest to you?  Will this marriage last?

And please, tell me What’s New with You?

Yeah, we are a little excited about this… 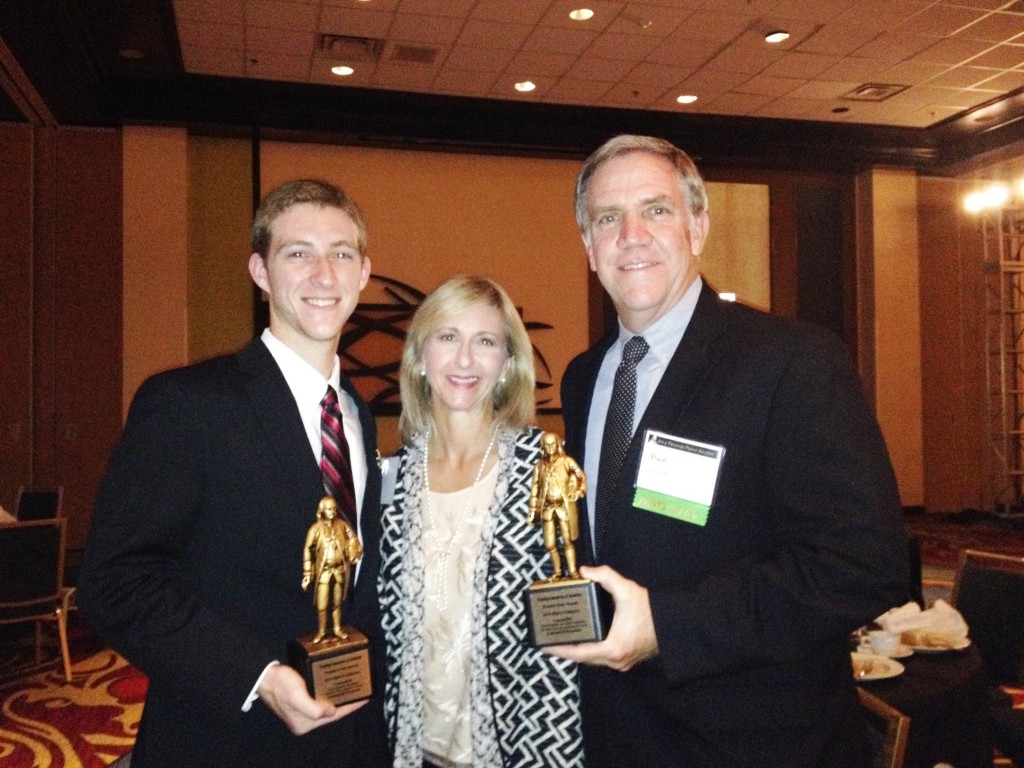 Michael, Lisa & Paul Strack after receiving the 2 Bennys in Chicago.

The Premier Print Awards are hosted by Printing Industries of America. In its 65th year, the annual contest recognizes those responsible for the creation and production of superior print communications. The event promotes excellence in print communications and rewards companies and individuals who produce the very best in print media.

This year, more than 3,000 entries were received from printing and graphic arts firms from around the world, and judges awarded the Benny to the top entry in each category. “It’s quite a compliment to be recognized by the industry as a company that produces award-winning print on an international level. The quality of print today is really quite amazing. To have won such a prestigious award for print quality is exciting for our entire team,” said Strack

Michael Makin, president and CEO of Printing industries of America, agrees. “The Benny winners represent the best our industry has to offer. This year’s entries were outstanding. There were entries from companies in 7 countries. Despite the fierce competition, CustomXM through hard work and dedicated craftsmanship produced not only one, but two pieces worthy of the Benny.”

The Soderstrom Society is named for Walter E. Soderstrom, one of the founders of the National Association for Printing Leadership (NAPL). The Society recognizes the contributions of industry leaders, including print company owners, industry supplier executives, educators, journalists and consultants. This year’s inductees represent a wide variety of industry segments, from equipment, materials, and services suppliers to printers, mailers, and marketers.

“We are pleased to present this impressive slate of Soderstrom Society inductees, who have distinguished themselves in their fields and are very worthy of the honor,” says Joseph P. Truncale, Ph.D., President and Chief Executive Officer of AMSP/NAPL/NAQP, the new association created this year through the merger of the Association of Marketing Service Providers, National Association for Printing Leadership, and National Association of Quick Printers.

“We are proud to add these outstanding industry executives to the list of eminent men and women that make the Soderstrom Society the industry’s most illustrious organization,” notes Truncale. “Over the years, Soderstrom Society members have made significant contributions to the growth and advancement of our industry in innumerable ways and membership in the Society is a mark of distinction in every area of graphic communications.”

“It’s quite an honor to be inducted into the Soderstrom Society, and I thank NAPL for this significant recognition,” said Strack, President of CustomXM.

For more information about CustomXM ( www.customxm.com) contact Paul Strack at 501-375-7311

All work and no play make Jack and Jill dull. We know that. I would guess that there still exist some organizations that insist that everything be all work. Fortunately, we are not one of those organizations. Don’t get me wrong, we work. We work hard. We meet the deadlines; we deliver the goods. But we also realize that there needs to be a mix. And that is what I love most about our industry. We are creative creators who mix things up. We take blank sheets and turn them into story-telling masterpieces.

And on some days, we not only get to be creative, but simply have fun. Just plain, stupid fun.

Which brings us to today’s International Print Day. We had big ideas for celebration – ribbon cuttings, open house, and even Ben Franklin. All that is going to happen. In addition to it being a social media event celebrating the power of print, we wanted just to celebrate our creativity. And have fun. And make videos.

Now we realize that sometimes fun can be embarrassing, but apparently we don’t care. While I certainly understand that you may not applaud this video, I wholeheartedly applaud our team members who opened up, stepped out of their comfort zone, and helped us with our world premier music video.

So in celebration of International Print Day, we proudly present “All About that Ink.”

(with apologies to Meghan Trainor and special thanks to Fiverr.com for the assist with the soundtrack. If you’ve never used Fiverr.com, check it out. For $5, you cannot go wrong.)

And if you want to sing along, here are the lyrics:

Yeah, it’s pretty clear, some think that print is through
But we can print it print it
Like we’re supposed to do
Cause we got that mix of graphics with all the white space
And all the right junk in all the right places

You see our artists workin’ that Photoshop
We know that Word ain’t real
C’mon now, make it stop
If your designs are lacking, we will raise em up
‘Cause every inch of print is perfect
From the bottom to the top

Yeah, our client’s they tell us, don’t worry about the cost
They say, “Your gonna get results, just print some more, right?”
You know we won’t give in to that Facebook Invites scheme
So if that’s what you’re into then go ahead and move along